Making a Masterpiece within the Mess

I didn’t know on January 1, 2016 that this would be the year I learned the most about myself. I didn’t realize it would be one I looked back and, at first glance, felt like I didn’t make any personal progress. I sat down yesterday and wrote down my 2016 in a nutshell on my typical yellow notepad. I quickly realized, I made more progress in 2016 than I had in a very long time. Sometimes, you have to look at the small details to see the big picture. Ya know, to really appreciate trials that felt unfair in order to see the gift of growth they truly brought. That was 2016 for me.

I dated more in 2016 than I have in all my other years combined.

This felt like a major failure at first, but looking back, I am extremely proud of myself. For the first time in my 30 years, I allowed myself to go on dates without being entirely sure that the person would be someone I would actually date long-term. In all my years past, I would push away anyone who attempted to pursue me. Mostly out of fear. In 2016 I made a promise to myself I would overcome the fear of dodging hurt, because heck – where had that gotten me thus far? I also made a vow to myself that I wouldn’t continue to date that person if I knew in my gut that it wouldn’t work. If you ask anyone who knows me well, they would tell you – “Aimee stays in relationships for far too long, even when she knows it isn’t a fit.” It took me 28 years to realize I hold on in attempts to stay committed, something I hadn’t seen growing up. After some good, well-paid, therapy I understood that my fear of giving up led me to staying in unhealthy relationships; every time. So, in 2016, it was my goal to break that habit. It was also a goal to date people who I would typically not consider. I knew I needed to see what was really important to me.

After a bad break up in 2015, I made a list of qualities I would want in my husband. I started with three things that are nonnegotiables and then added every single desire (not need) that I prayed for. I’ve shown this list to some close friends, guys included, and while it may seem overly picky, I believe God when He says to ask for what you desire. God will provide exactly what I need, not what I want, but I’m convinced praying will help shape what is real versus what is unrealistic.  I learned something from every guy I went on a date with, one date or a month of dating, and made adjustments to my list.

I dealt with some major insecurities which led to pressing false expectations into relationships, something that was entirely unfair to the person I was hoping to invest time into.  I want to be the type of woman that a Christian man is looking to date, instead of looking for a Christian man to be entirely equipped without me being on the same level.

I took a new job.

I loved my position with Nestle, but was approached by a company that would allow for the career growth I had been praying for. This was a huge decision for me, because Nestle felt like home. It was the best decision I’ve ever made. At Oxford, based out of the UK, I work harder than I ever have and it makes me feel amazing. It’s still in healthcare, working in both hospitals and physician offices. Every day is different and extremely challenging. I come home each day exhausted, yet full of worth. It’s true when they say, “Dreams don’t work unless you do,”

I traveled more and made big travel plans for 2017.

I went to Haiti, a beach trip with my Nashville gals, Hill Country, Boston, Broken Bow, Michigan, Chicago, and California multiple times, including San Francisco – a place that has been on my bucket list for years.

2017 already has Park City, Utah, California and ISRAEL in the books. My #1 dream adventure has always been to walk on the very ground where Jesus walked. To see and touch the places that our Savior touched. Words cannot express the excitement I have for that trip. Eeeeek! 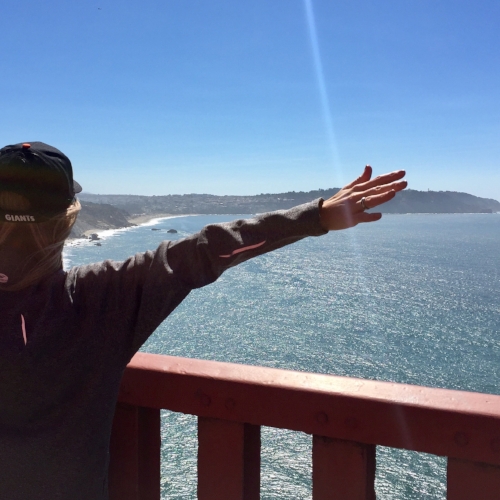 I moved into my dream place.

I settled into a place and spent a lot of money to decorate it, like I would a forever home. This may seem silly, but I have waited to do that, secretly hoping I would have someone to do it with. Well, I decided to start living my life fully, including making a place feel like a home. I love coming home every night. I am so content. It was one of my favorite projects in 2016.

I got a tattoo.

Never it a 100 years did I think this would happen. I’m not against tattoos, but it just wasn’t something that I ever saw myself doing. Well, in mid-December I got a word on my forearm that has a ton of meaning to me: warrior. As weird as it sounds, as soon as the tattoo artist started his work, I thought to myself – I am so proud of the woman I am becoming.

I felt freed. It hit me.

I am finally resting in a place where I am less worried about what others think of my life, and instead, completely consumed with how I feel my life is best representing the Lord.

A 33 year old Nashville female who loves Jesus and looks at life for what it is; messy and beautiful. After writing for Christian magazines and nonprofit blogs, Balanced Chaos came to life when she realized the world needed a raw dose of reality.

Life isn't always as pretty as the pictures we see, but it's certainly still as beautiful. Balanced Chaos is a lifestyle blog aimed at helping others find ways to balance their life in all aspects. Making a masterpiece within the mess. Let's tackle this together! - A